Continued from Part I: So, when we look at how the church should’ve organized herself, we must see the 3,400-year-old model, that the first believers in Acts 1 understood! If we don’t look to the original tribal model in the Sinai desert, then we are left to our own imagination, when it comes to building or growing the church. And, so far, human imagination has blown the church way off course! The organizational models that we’ve chosen, and continue to choose, will never fulfill the vision Jesus had for the bride of Christ.

Our current structures are built on the following mistaken beliefs:

1. It’s good to organize the church with layers of polity and government.

Nevertheless, as the church developed, she ignored the teachings of Jesus, in favor of forming her own set of rules and laws. She adopted her own personal government!

The church intentionally placed her own rules between God and God’s people—doing precisely what Jesus wanted undone! Oops!

Today, millions of faithful people are stuck in the muck and mire of local, regional, or global church government, and its polity. The spiritual leaders of today want to find The Way of Jesus—but we will never find his way, if we cannot remove ourselves from church polity, and church government!

Christians have spent centuries preaching, teaching and attempting to govern societal need, by imposing rules of religious morality on society. In doing so, the church became a hindrance in the same way that the 600+ laws of Moses became a hindrance. There are only Ten Laws + Two Laws of Love, which summarize the original Ten. That’s it. Forever!

It is not the church’s place to step in, and govern society, when the boundaries of good living were established thousands of years ago. Moreover, Jesus sealed and fulfilled those boundaries with a rightful spirit of love. Eventually people will realize that church government is completely unnecessary. That day is coming, and not a moment too soon!

2. It’s good to organize local ministry around a personality, a gathering place, or a specific missional need.

The pastor, priest, or worship leader, to whom people flock today will inevitably die, disappoint, or disappear tomorrow. Likewise, the building or the gathering place will crumble, if not maintained. The specific mission, that the previous generation thought important, will eventually fall by the wayside as younger generations, with different priorities, step into leadership positions.

When churches are created around these temporal aspects of life, the organization seals its temporal fate. Such efforts will die, disappoint, or disappear in due time. Then, the local church is forced to reinvent itself every generation or two, with new mission statements, new goals, new objectives, etc. This perpetuates a vicious cycle of growing, and regrowing. Inventing and reinventing. We’ve all seen it happen in our local congregations. A pastor retires, dies, or leaves, and the ecclesia changes. It’s focus changes. It’s mission is re-examined. 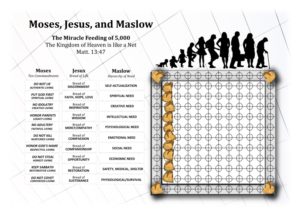 A net is the symbolic image of the kingdom of heaven. It’s also a literal organization of people, who care about the needs of everyone living in a specific geographic area, without any attachment to the personality of a church leader, a specific gathering place, or a specific missional effort. Creating the living network is the only missional effort! Moreover, if those of us, who live in the 21st century, factor in the wisdom of Maslow’s Hierarchy of Need, the church could feed Jesus’ sheep in a truly intelligent way. It would be the most comprehensive nourishment humanity could offer.

The net has the singular purpose of empowering people with nourishment, so that God’s people can care for themselves, generation after generation.

The net functions as a network of leadership that eats, sleeps, plays, laughs, gives birth, and dies within the specific geographic area that the network represents. The net operates without a physical place to lay her head. The net is the go to sanctuary for all human need, in the small geographic area served by the network.  As life goes on, the net never needs to reinvent herself, or rethink her mission. She only needs to rotate her teams of leaders.

It’s that simple! But, it’s not easy to change our ways and habits. Still, we can’t keep making the same mistakes, over and over again. We must deal with our mistakes, and migrate to The Way of Jesus. If we can imagine the church, as a fishing net that is cast over the spiritual waters of an entire village, town, or city—catching fish regardless of their kind—then, the vision Jesus imparted for the church, will also be caught.