An Organizational Vision for the Church of Tomorrow 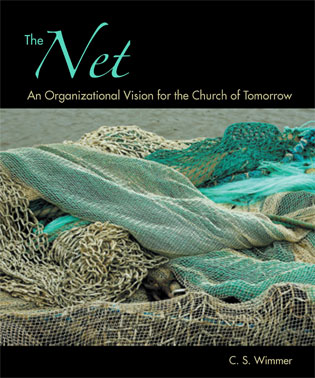 Do the followers of Jesus know how to make nets? Did Jesus teach a net-making vision? Yes! And Scripture provides the necessary information to fulfill Jesus’ vision!

Part I of The Net is devoted to the process of discovery. Through a series of visual illustrations, an organizational model is retrieved from Jesus’ boyhood tradition of law and applied to the miracle feeding of the 5,000. Then, during a second feeding of 4,000, an important change to the traditional model is made through Jesus’ perspective on the law of Love. Hence, a new organizational vision is born through the teachings of Jesus – a vision of Law and Love. Part I also discusses organizational insight gained through some of the parables of Jesus, the opening words of Acts, and several visions in the book of Revelation.

Part II of The Net is devoted to the art of net-making as an organizational endeavor. Future net makers are encouraged to embrace the spiritual symbolism of a model rooted in Scripture. The concept of geographic netting is discussed, followed by ideas for constructing future nets. The concluding chapters of The Net invite all people to determine their spiritual willingness to become future net makers in the kingdom of God and to be aware of their own spiritual readiness to embark on the net-making vision.

These are not ordinary times. The spiritual air is swirling. Shifting winds are causing uncertainty and bewilderment, which can be both frightening and exciting. Some people ask, “Why can’t things be the way they used to be?” Others whisper, “Thank God, things are changing!”

To be certain, something is happening on a grand scale. As God’s people in the Christian faith tradition, we have many things to ponder. Will we fight against the spiritual gusts that push at us from differing directions, or will we allow our spirit to be carried to the place of God’s desire? Time will tell.

Hopefully, many souls will feel the presence of God’s Spirit and submit without hesitation. For those who are willing to be carried along, God’s guiding hand is sure to provide the best way to travel! It is conceivable that this spiritual shift, perceived by so many people, is in its early stages with much stronger winds to come. The overall period of intense change could occur over many generations.

Prologue: The Winds of Change

Three concepts seem important to mention in preparation for the information in this book: (1) a transfiguration of the church is underway and irreversible, (2) we are entering a season when spiritual roots will deepen, and (3) the Bible may have more to teach us through a different lens.

I’ve chosen to use the word transfiguration because it infers a change beyond what human effort could cause, manipulate, or imagine. The use of this term invokes the image of the transfigured Christ, which is my intention. At the time of the transfiguration, the disciples, who witnessed the phenomenon, described a change in Jesus’ clothing! “His clothes became dazzling white, whiter than anyone in the world could bleach them,” Mark 9:3 NRSV.

In the same way, I believe that the church will be transfigured during this time of intense spiritual change. I believe she will appear newly clothed in a heavenly way …

Jesus asked, “How many loaves have you? Go and see.” When the disciples found out, they said, “Five—and two fish,” Mark 6:38. Thus the miracle begins with the nourishment that the disciples had. (For the purpose of this discussion our focus will remain on bread.)

At this point in the story, symbolism begins to play an important role. Mark mentions that the disciples told the people to sit down on the green grass. While the color, green, may seem like an insignificant detail, the green grass indicates the presence of living, growing, fertile, vegetation. It’s one of those visual clues in the Bible that is full of spiritual implications.

Think about it! A smaller crowd . . . more bread! On the surface, the feeding of 4,000 just doesn’t seem as impressive as the feeding of 5,000. But perhaps Jesus wasn’t trying to impress anyone. Perhaps he was in the process of teaching something powerful—something that required two lessons rather than one!

Perhaps the two feedings indicate an important aspect of growth, change, and spiritual fulfillment of Jesus’ purpose on …

3. The Problem with Yeast

Jesus wasn’t feeding people with yeast-filled ideas. In fact, many times Jesus asked people to return to their homes in silence after they had been with him. Nevertheless, the leaders and rulers of Jesus’ day were obviously afraid of his growing popularity.

Even though a physical overthrow of the social order was never intended, the authorities evidently believed that Jesus’ teachings could provide a pathway toward a militaristic uprising. Therefore, it shouldn’t surprise us that the authorities of Jesus’ day began to fear his teachings and view his growing popularity as a potential threat.

In truth, Jesus merely tried to empower individuals for personal good. He provided them with …

Another facet of net making is the art of casting, throwing, or spreading nets over a geographic area. Geographic netting is a basic concept—not entirely foreign to the institutional church.

Local congregations have always sought to serve the needs of local communities. However, the institutional church sought to plant herself in a geographic area, build a house of worship, and call kindred spirits to assemble in the building. This model of attraction satisfied people in the past, but the model has ceased to be effective.

It no longer works because it was built on insular thinking that fostered exclusivity. It was built by human beings who had no net-making plan.

Therefore, the present institution doesn’t look like a net, nor does it model egalitarian thinking or the inclusive teachings of Jesus. …

Communicating the net-making vision will be challenging to say the least. It’s difficult to change people’s perceptions. However, understanding the depth of spirituality that undergirds The Net of 144 may be the key to its acceptance.

Ordinary people hold The Net of 144 together just like the 144 gold rings that held the ancient tabernacle together. Spiritually speaking, it could be said that each of the 144 people who serve in The Net, is an embellishment on the church’s bridal dress. This is her adornment, as she reflects the image of a bride who is dressed for her husband, in Revelation 21:1–2.

Those who volunteer to represent their community of 1,000s may also want to learn about the original tabernacle and its spiritual presence for the tribes of 1,000s, 100s, 50s, and 10s. Such insight would naturally connect God’s people to the …

10: The Work of the Church of Tomorrow

This particular parable also offers the church an ordered sequence of tasks that she is to undertake, at appointed times, during her homeward journey. In my opinion, the parable of the net embodies the work of the church as Jesus envisioned it happening over time.

“Again, the kingdom of heaven is like a net that was thrown into the sea and caught fish of every kind; when it was full, they [fishermen] drew it to shore, sat down, and put the good into baskets but threw out the bad. So it will be at the end of the age. The angels will come out and separate the evil from the righteous,” Matthew 13:47–49.

We may not think about the passage of time when we read the parable of the net, but we should. The sequence of events within the parable transpired over a period of time. Although the duration of time is …