Christians make one mistake—and it’s a whopper! We don’t understand the Way of Jesus! We think we do, but we don’t. As a Christian, I never knew we were making such a huge mistake. The way we do church is just plain wrong! So, now that I see the mistake, it’s impossible to keep quiet about it! I can’t. Nor should I. As a member of the body of Christ, I am obligated to speak up. Moreover, I believe that the church will spin her wheels forever, unless Christians deal with this mistake, and agree not to continue making it.

So here’s the crux of the matter:

Christians believe that the church of today was Jesus’s idea!

It wasn’t! That’s our big mistake. And it’s a whopper because it colors every aspect of our thinking! Christians have been taught to believe that the assembly of people, mentioned in Acts 1, founded the Christian Church, as we know it today. They did not. Moreover, the first believers never laid the foundation for the institutional model we call, “church.” They laid a foundation for something entirely different! I’m certain Peter, Andrew, James, and John would all be rolling over in their graves, if they could see the church’s present image, in comparison with their initial efforts to organize, the Way Jesus taught them to organize.

Our present model of church, blinds us to The Way of Jesus.

The earliest believers in The Way claimed the church that Jesus claimed. They claimed a network of God’s people birthed in the Sinai Desert, at least 1,400 years before Jesus’s earthly ministry began. So the church, as we know her today, might sport a 1,700-year-old history under human domination, but The Way that Jesus taught his disciples to assemble, group, or gather, began at least 3,400 years ago. According to the biblical narrative, the ecclesia that Jesus inspired 2,000 years ago, began under the leadership of Jethro, Moses, and the tribal encampment. That Way looks nothing like the church of today.

When Christians don’t see the rich, spiritual history of the organizational model that Jesus claimed, Christians can’t promote his vision for the church. And that’s a huge problem. It isn’t up to the followers of Jesus to make church “entertaining, fun, or exciting.” It’s Jesus’ vision that we, as followers of the Way, make nets that feed and love his sheep. Period. It is Jesus’s vision that we must obediently adopt. In doing so, the church will become an entity everyone will want to embrace, be part of, and promote. So, we cannot continue to imagine our own ways, for the future of the church. We must discover the spiritual and organizational details of Jesus’s Way.

Jesus embraced the ancient model revealed, through the travels of a band of Israelites, on their homeward journey to a Land of Promise.

The Exodus, literal or mythological, provides us with a micro image of the journey that the whole of humanity is experiencing. That micro image is magnified billions and billions of times, as the collective human race slowly takes that same journey. It is a journey out of spiritual bondage into a land of spiritual freedom. That’s the promise! The human journey through time is an exodus. All of us are taking this journey, together.

The church of today cannot separate herself from the Exodus, unless she is content to be an organization that claims Jesus in name only. Ouch!

The organizational grouping of leadership, representing the spiritual and social needs of God’s people, is shown below. Each circle symbolizes a human representative in ministry. 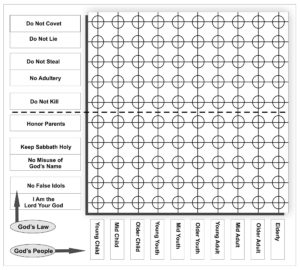 Jesus’ allegiance, to the tribal organizational model in the desert, never wavered, as evidenced in Mark’s account of the miracle feeding of the 5,000. Jesus intentionally grouped the hungry crowds into 100’s and 50’s before breaking bread, and handing the broken pieces to his disciples for distribution.

Adding two Laws of Love to the original Ten, sealed the original organizational model with a spirit of Love, thereby fulfilling God’s Law. The spirit of Love was the very spirit missing within the Mosaic environment. The result was Ten + Two Commandments. This action ensured that the assembly, groups, or gatherings in Jesus’s name would always feed her multitudes with a rightful spirit of Love.

By including the commands to Love, a new covenant was created, but God’s Law was integral to both the former covenant, and the new covenant.

The increase of leadership, representing the needs of God’s people, is shown below. Notice both Law and Love are represented in the leadership network. 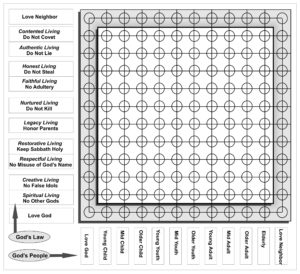 Jesus wanted every letter of Ten Commandments to be upheld, until heaven and earth shall pass away. His vision for the church’s foundation is a foundation of Law and Love. But Love is to be the spirit, by which the commandments are taught and lived, in everyday life. Jesus willingly went to his death to reveal the empowering nature of God’s love. He didn’t go to his death to abolish the Ten Commandments, but to establish God’s grace, mercy, and forgiveness extends to all people; to establish that all humans are to be empowered under the covenant of God’s Love!

Without this spiritual insight, at the forefront of organizational leadership, Christians are doomed to forever misunderstand the vision Jesus had for the church. In fact, we’ve been taught to completely reject God’s Law! We are scared to death of falling under the “old” covenant. But, it’s not the former covenant that should scare us. It’s the spirit of legalism, hypocrisy, self-serving exclusivism, and self-righteousness that should scare us.

We can be certain that the first believers of Acts 1 understood The Way of Jesus. They knew that they were to organize people into small groups, bless and break bread, and then distribute the broken loaves to all people at the grassroots level. In this same manner, multitudes would be fed by “doing this in remembrance of Jesus.”

The only way to carry out the vision Jesus had for the church, is to change the way Christians think about organizing people.

We must reach back into our spiritual history, and learn something important from the 3,400-year-old tribal structure that Jesus employed, during the feeding of the 5,000. We must notice that the structure looked like a net. We must listen to Jesus say, “The kingdom of heaven is like a net.” And we must realize that he meant it!