Genesis 1: Blinded by the Light – Literally!

I think we can agree that unrevealed information exists in all literary forms. It doesn’t need to be intentionally hidden material. The unrevealed is just a less obvious form of communication. Such is the case with Genesis 1! Unfortunately, we debate all of the wrong issues, regarding this account, because we don’t, or can’t, see the unrevealed.

I assert that our eyes are veiled to something truly important in this text. Therefore, I’d like to offer the following morsels of insight, that will hopefully whet people’s appetite, to dig deeper into the unrevealed aspects of this ancient story.

Why is Genesis 1 so tightly structured, and well ordered?

Here’s my answer to the question: The text follows the color order of the visible spectrum of light—the rainbow! Who knew, right? It’s true. The rainbow is unrevealed, yet completely present in Genesis 1. The writers established a creation story based on seven colors—violet, blue, green, yellow, orange, red, and the extra-spectral color, purple. So the color order of the rainbow actually structures the text! The sky is blue, the vegetation is green, the sun is yellow, etc. 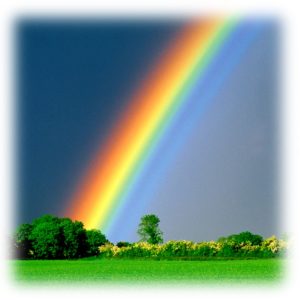 Purple is an extra-spectral color that is visible in the rainbow, but not part of the spectrum itself. It is a combination of red and violet/blue light at both ends of the spectrum. Also, for those who insist that the color, indigo, must be included—it is—but indigo cannot be distinguished, by the naked eye, as a separate band of color. Indigo is a tiny, tiny band of blue light that kisses violet light! If Newton were alive today, he would happily agree.

What inspired the priestly writers?

Well, this is tricky, because we can’t know for certain. However, using the colors of the rainbow, as a foundation for their story, the priestly writers were able to claim an image of light, that hadn’t been hijacked by surrounding cultures, as popular objects of polytheistic worship. The sun and moon had already been claimed as favored gods, and the stars held the mysteries of everything predictable in ancient cultures! So, the inspiration behind Genesis 1, was an issue of rejection. The priestly writers didn’t want the surrounding cultures, to define the faith perspectives of the people of Israel. The high priests were monotheistic spiritual leaders, who stubbornly refused to be defined by other cultures! Make no mistake about it! Anger towards that which people detest, can provide much fuel for inspiration! The worship of sun gods, moon gods, and starlit fantasies provided the fuel!

What motivated the priestly writers to add a prequel to the older, more colloquial story that is now, Genesis 2?

The older creation story, featuring Adam and Eve, did not provide the people of Israel with an eternal connection to the Creator of light and time. It didn’t give Israel a sense of her own beginning—a starting point from which the people of Israel could claim their place in history.

Moreover, the science of horology was in full swing, when sacred text was inspired, but the measurement of time had not yet been perfected in any culture. People were trying to record their histories, with no reliable historical lens, through which to understand the passage of time. While everyone was honing their clocks and calendars, the science of horology and the worship of celestial gods, enjoyed a cozy, intermingled relationship. That’s just the way it was.

However, those within the ranks of the Jerusalem priesthood, would have been troubled by the intermingling of faith, and the science of horology. How ironic is that? They would have wanted the people of Israel to embrace a relationship with one supreme God, Elohim—the Creator of light and time itself. If Israel’s God was the Creator of light and time, then the lesser sun and moon gods would be subject to Elohim’s authority!

Israel must worship a God that trumps all other gods! And that’s how the story plays out when following the color order of the spectrum. The greater and lesser lights are created by Elohim on the fourth day, with yellow light! But Elohim owns the entire spectrum. Hence, the spiritual motivation behind Genesis 1, was to guide the people of Israel away from polytheism in their worship practices! Ancient near-eastern creation myths, and their cosmological views, while strangely different from our own understanding of the universe, had little to no impact on the spiritual purpose of this text. Again, these were people who stubbornly refused to be defined by their surrounding cultures!

Additionally, why did the priestly writers create a second account of the flood narrative—a story of re-creation? Why wasn’t the older flood story sufficient?

The older flood story did not include the covenant of the rainbow! It would have been important to the priestly writers, that Israel be permanently connected to an image of light, which would carry them through the passage of time—from beginning to end! The flood narrative was the perfect story, into which the image of a rainbow could be revealed, after it finally rained. (See below)

Lastly, does a connection exist between Genesis 1, and the priestly embellishments in the flood narrative?

That’s the problem with prequels. They are written after an older story has already been developed. The priestly writers could employ the colors of the rainbow, as a storytelling foundation in Genesis 1, but the actual image of the rainbow couldn’t be revealed, until after the skies opened and it rained enough to flood the earth. Sheer literary brilliance! And there’s sooooo much more that the rainbow reveals in Genesis 1!

Let’s not remain blinded by the light. Okay?