When Creation Speaks: The Key to a Common Spiritual Language

Note: Use the Contact Form to request a free PDF entitled, The Clock, The Key, and The Net: Three Loaves of Bread for The Church at Midnight. It is a condensed version of all three books. 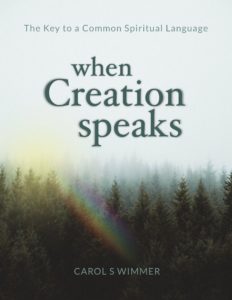 When Creation Speaks: The Key to a Common Spiritual Language embarks on a thoughtful investigation that binds together the purpose of the key of the house of David prophesied by Isaiah, the seven thunders of Revelation, the account of Creation in Genesis 1, and the vision of intersecting wheels in Ezekiel.

After introducing the idea of a common, peacekeeping language associated with the key of David, the investigation connects Revelation 10 to the account of Creation in Genesis 1 where the reader discovers a wheel of light—The Key to a Common Tongue—with fourteen images of Creation around its rim. The fourteen images form seven complimentary relationships, or the seven thunders, on the wheel. The wheel of light is also a wheel of time that reveals the timekeeping method in Genesis 1, the time of no more delay, Rev. 10:6, and the time of the seventh trumpet, Rev. 10:7. When the wheel of light in Genesis 1 connects with the wheelwork described in Ezekiel 1, the images of Creation begin to move around the rim of the wheel creating an interactive communication system which speaks with a common spiritual tongue.

A discussion of The Key and the meaning of its seven thunders follows the activation of the wheelwork. The book concludes with the need to prophesy again about peoples, nations, and languages.

Preface: A personal account of the ways in which my childhood observations of Creation shaped my comprehension of God’s immense love for me and the whole of Creation.

Introduction: The Introduction invites the reader to participate in an investigative process that connects the spiritual purpose of the key of David, with the texts of Genesis 1, Ezekiel, 1, and Revelation 10. The investigation employs a lens that focuses on light, color, imagery, and timekeeping and the questions asked by this type of inquiry.

An opening discussion focuses on the confusion of language as recorded in Genesis 11, the heart of spiritual confusion even when speaking the same language, and the present shift away from scattering toward a great gathering of peoples, nations, and languages.

With the spiritual intention of The Key defined as a peace-keeping tongue, the investigative process continues by examining all seven references of both rainbows and thunders (plural) within the scriptures. In doing so, the reader sees the inter-connectedness between the seven rainbows, along with the connection between the mighty angel, the little scroll of seven thunders of Rev. 10, and the account of Creation in Genesis 1. The chapter concludes by calling attention to a “divine pause” between Revelation 10: 6 and 7—a pause between two ideas: the sound of the thunders and the time when the seventh angel is about to blow his trumpet.

As the divine pause from Revelation 10 begins, this chapter investigates the text of Genesis 1 where circular structure of The Key and its connection with the spectrum of light (the rainbow) become visible on seven days with seven colors. The chapter briefly discusses the science of light as well as colors mentioned within the scriptures. As time progresses beyond the text of Genesis 3, an 8th Day of Creation dawns on which the whole of Biblical history occurred. A discussion of timekeeping on the 7th and 8th Days of Creation follows. (see image at right) The chapter concludes with a visual image of both The Key (in stationary mode) and its twin companion—an ‘age-to-age Day Clock’ originating from the text of Genesis 1.

This chapter discusses the slow process of guided revelation. It promotes the idea that the spirit of the risen Christ is guiding the collective human journey from the time of Christ’s birth, 2,000 years ago, to the time of the morning star at the end of the 8th Day of Creation, 2,100 years from now. Four views of Revelation are valid in part, while being problematic in part. The chapter asserts the need to rid Christianity of ‘end times’ ideas involving darkness, destruction, or violence in favor of following Christ into the light (dawn) of a new day.

The chapter examines scriptural evidence suggesting a connection between the mighty angel of Revelation 10, who holds the little scroll of seven thunders, and the letter to the fourth letter to the angel of the church of Thyatira. The chapter states that The 8th Day Clock, illuminates the humanity’s spiritual journey through astronomical ‘ages’ from the dawn of the 8th Day to the time of the morning star, as ancient cultures at the time of Jesus would have understood the ages. (Time periods are not associated with dispensational theories.)

The ‘divine pause’ ends by moving away from the subject of Time and toward the subject of Language. The chapter investigates the seven voices of the seven thunders on The Key. In doing so, a common spiritual tongue emerges based on the images of Creation situated along the rim of the wheel of light. God’s voice speaks silently through the images of Creation thereby solving the mystery of the seven thunders of Revelation 10. The human spirit hears each thunder as the images on one side of The Key form relationships with the images on opposite side of The Key.

This chapter investigates the imagery recorded in Ezekiel 1. Conclusions argue against the traditional explanation of a wheeled-chariot by clarifying the reasons for the earthly activity of rising wheels underneath the dome, and the heavenly image of a stationary throne surrounded by a rainbow above the dome.

The chapter investigates the visual appearance of the living creatures, their faces,  wings, wheels with rims full of eyes, and the action of torches moving to and fro. Again, conclusions question traditional scholarly assumptions regarding the details of this vision.

The concluding chapter in Part II—Developing The Key simply introduces the entire language of Creation which contains 182 wheels of light and the spiritual concepts related to the common tongue of seven thunders. The wheels appear on 14 pages in the middle of the book. 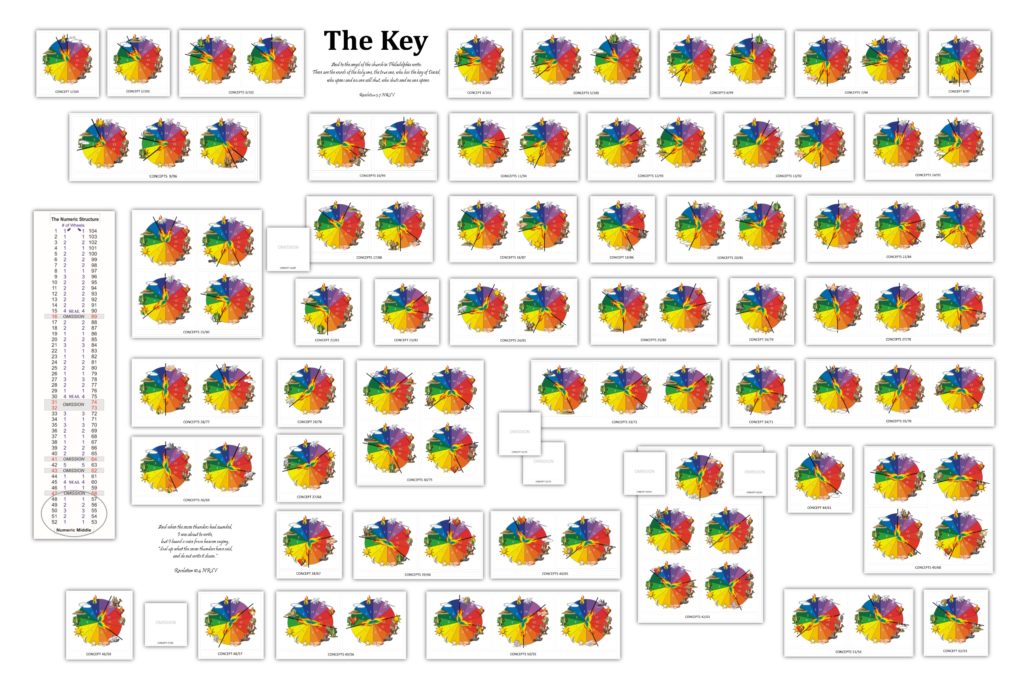 This chapter moves from investigation to a discussion of The Key and its common tongue. Because our eyes must interpret the movement of images around the rim of the wheels, Ezekiel wrote that the rims were “full of eyes.” Our interpretation of the common language depends on spiritually healthy eyesight. This chapter discusses two ways to see our world: through horizontal eyesight belonging to the flesh of the animal kingdom, and vertical vision—the gift of perception that leads to compassion, sympathy, and empathy.

The journey from Fish to Stars is the spiritual journey every human soul takes throughout their lifetime. The task of God’s work in the world is a “Light to Life” endeavor. The task of human work is a “Life to Light” endeavor. This chapter features different wheels of light that show the progression of the Fish to Stars journey. Knowing the end goal of our spiritual journey can facilitate discussions about spiritual maturity as well as where and why we become spiritually ‘stuck’ at certain places along the path.

Since The Key language of Creation and its wheelwork functions within a closed numeric system, this chapter demonstrates the way the numbers referenced within the scriptures can be located within the wheelwork. The chapter examines the phrase “40 days and 40 nights,” the 276 passengers in the shipwreck in Acts 27, and the miraculous catch of 153 fish in John 21. The chapter also addresses the number of a human, 666, by giving several options to consider regarding how to calculate this number. It also considers, 777, and 888.

The last chapter in the discussion of The Key of seven thunders examines the usage of the ancient practice of gematria. The chapter features quite a few examples of biblical text translated into numeric values that lead to wheels within the wheelwork. While some people may want to convert Hebrew and Greek words into numeric values in order to look at the wheels that correspond with the values, this chapter demonstrates the futility of such an exercise. The Key is not a code. The Key is God’s voice speaking through Creation.

The final chapters of this book focus on the idea of a second age of prophecy as mentioned in John’s vision of a little scroll of seven thunders. John must “prophesy again about many peoples, nations, languages and kings.” A second age of prophecy is necessary because Christians, through the gift of hindsight, have slowly gained more insight about church history, the Bible, the work of the cross, and the revelation of Christ’s presence in the world. The chapter includes 12 midnight hour references that foreshadow the present-day age-to-age shift that is greatly impacting the church universal.

One midnight hour foreshadowing, mentioned in Chapter 17, is the parable of the friend who goes to a friend at midnight to request three additional loaves of bread in Luke 11. The second age of prophecy requires additional bread as indicated by the second miracle feeding of the 4,000 that follows the first feeding of 5,000. This chapter introduces an organizational model for the dissemination of bread. The leadership model mirrors the ancient Israelite organization of tribes recorded in Exodus which Jesus adopted during the two miracle feedings. It is a Net of 144, which reflects the visions of 144,000’s and the measurements of the Holy City in the book of Revelation. The Net of 144 exists to meet human hunger (in all forms) at the grassroots level of life on earth regardless of people’s spiritual beliefs. The Net of 144 and The Key language of Creation dovetails together to teach and disseminate a common spiritual tongue throughout the world. By the end of this chapter, the reader has an age-to-age Clock, a Key, and a Net of 144—three loaves of bread at the conceptual midnight hour on the 8th Day of Creation.

The closing chapter discusses the affect that temporal timekeeping has on the human mind and spirit. It reframes sin as forgetting one’s divine identity. Timekeeping also plays a role in reframing the identity of Satan as the lesser voice of temporality (the dragon) that gives authority to the lesser government of temporality (the beast) that in turn creates an image to worship (the 24-hour clock.) The chapter employs the science of light to reframe spiritual purity as an act of bringing all light together to create white light, thereby cancelling out the discoloration of everyone who forgets their divine identity from time to time.

A call to keep dreaming of a better world despite the naysayers.