Male and Female in Genesis 1

In Genesis 1, the masculine, Elohim, creates. The feminine, ruach, moves, stirs, or activates that which is created.  The forms and functions of God, and the Spirit of God, behave differently. Given this view of gender, how might we think about the creation of God’s image, male and female, within the human species, as written in Genesis 1:26-27? Would the image of God, male and female, have any connection with human body parts?

Firstly, we might want to consider God’s image from the priestly writer’s perspective. Presumably, the text of Genesis 1 was decades, possibly centuries, in the making. The details of this text are thoroughly designed. Genesis 1 is not sloppy storytelling. It is a highly organized, well thought out masterpiece. We can be assured that the introduction of masculine and feminine gendering was not an accident.

From a literary perspective, it would have been just as effective to write Genesis 1:1-2 in the following manner:

In the beginning Elohim created the heavens and the earth. The earth was formless and empty. Darkness covered the surface of the deep and Elohim moved about over the waters.

Elohim creates, and Elohim moves. Yet, this rendition of the text was not the literary choice made by the priestly writers. The priestly source chose to introduce ruach as a feminine mover—the Spirit, Wind, or Breath of Elohim. Ruach is not separate from Elohim. She is Elohim’s life-breath and equal partner with Elohim’s creative energy. So, the act of creation and the breath in Creation is one source of power acting harmoniously in unison—creator/spirit.

Hence, it is quite possible that the male and female genders of God’s image in Genesis 1:26-27 intentionally mirror this same masculine/feminine image of Elohim and ruach in Genesis 1:1-2. The creator/spirit imagery provides a male/female image of God that is present in humankind. Do we, as human beings, reflect this image? Are we both masculine creators and feminine spirits with the ability to act and breathe life into our actions?

The male/female imagery also accounts for the use of the plural pronoun in Genesis 1:26. The Hebrew word, tselem, is a masculine noun meaning “image.” Demuth, is a feminine noun meaning “likeness.” The two nouns seem to satisfy the plural, “Let us make humankind in our image, after our likeness.” Indeed, many scholars have argued that the words, image and likeness, are synonyms used interchangeably throughout the Hebrew Bible. This usage may be true, but the two words are differently gendered in the language, which is often overlooked.

These literary duos (creator/spirit, masculine/feminine, image/likeness, male/female) may offer the reader a sense of completeness regarding the nature of God’s image/likeness, until we encounter the following three-step process in Genesis 1:27:

As mentioned earlier, nothing happens by accident in this biblical masterpiece. Why did the priestly writers define a three-step process of creating God’s image, after God’s likeness, when only two masculine and feminine genders exist? It would have been just as effective to write:

So, God created humankind in his image, male and female he created them.

Again, this rendition of the text was not the literary choice made by the priestly writers. We can be certain that the priestly source chose to introduce a three-step process of creation for an important reason. What is the third component that must be inserted to complete the creative process? What is it, about the image of God, that is not only masculine (Elohim) and feminine (ruach), but also, a likeness.

I assert that the missing component is found in the words, “Let there be light,” in Genesis 1:3. Illuminating the original creator/spirit power source is a revealing of God’s own self—as in a likeness, that is reflected in Creation. Thus, when God’s image is created within humankind, the image can then reflect the likeness of God—but only if light is involved. If light is not involved, then it is entirely possible to be made in the image of God, while not reflecting God’s likeness! Possessing an image and reflecting that image are two very different matters.

It must be noted that the Hebrew word, owr, meaning, light or illumination, is a Hebrew noun with a feminine gender. Like the feminine noun, ruach, the feminine noun, owr, could be said to be the illumination of God’s spirit by divine light. The combination becomes holy fire. Together, ruach and owr—spirit and light—complement one another. What flame does not increase or decrease depending on the amount of wind that is present. What fire is not dependent on air for its existence?

It must also be noted that the presence of divine light is not created in Genesis 1:3. Elohim cannot create the essence of what Elohim already is! Elohim is the light, owr, just as Elohim is spirit, ruach. The Hebrew word, bara, (to create) is not used in Genesis 1:3. The words, “Let there be light,” revealed Elohim’s light that had been hidden by the darkness in Genesis 1:2. Once light is revealed, light is separated from darkness and the work of creation continues. However, the work is now accomplished by God’s image in three forms, or essences—creator/spirit/light.

Depicting the Image/Likeness of God:

Eventually, most people point to one of two places, or both. They will either chose the human brain, or the human heart. Many will decide the image of God takes up residence in both brain and heart—an entity we call the human mind. As a species, we have yet to determine how the mysterious mind functions. We’ve figured out the workings of the human heart, and we’re currently investigating the brain, but the mind is a spiritual phenomenon that remains elusive.

Thinking back in time to the priestly writers, where did they think the image of God lived within the human species? To answer that question, we must consider their perception of the heart and brain. By the time the Pentateuch was written, circa 400 BC, or so, ancient neuroscientists had begun a long history of questioning the relationship between brain and heart.

Originally, the heart was considered to be the seat of intelligence, but a shift in thinking occurred around 6th or 7th century BC. Neuroscientists still didn’t understand the true function of the brain, but the shift in thinking had determined that the brain, rather than the heart, was most likely the seat of intelligence, or at least contributed to human thinking.[i] The history of neuroscience is crucial when determining the information known by the priestly writers of Genesis 1. Yet, we can be fairly confident that the priestly writers were on the same page as the neuroscientists of their time.

Today, the brain and heart are the most logical, rational homes for the image of God, male and female. Brain and heart suggests that humans, regardless of gender, have both male and female attributes of God within us. More importantly, the depiction of brain and heart provides a means of talking about masculine and feminine genders separate from any connection with human sexuality, sexual anatomy, or sexual identities. Once again, however, the brain and heart identify a nice duo that must be completed with a third entity to correspond with the three-fold process of creation in Genesis 1:26-27.

The question then becomes, “What is the best way to depict the likeness of God within us?” Now, that’s easy! Light is an image we can create! Light is an image humankind has been playing with since the dawn of time. So, we only need to turn to the biblical text for the depiction. How did the ancient storytellers depict God’s presence? How was God’s divine presence made known to Moses? How were the people of Israel guided by God during the wilderness wanderings? How do we symbolically indicate the presence of God in our worship services, today? 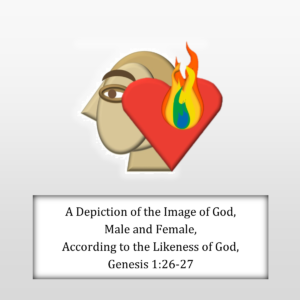 Hence, the three-fold process of creating God’s image, after God’s own likeness, is depicted by combining the brain and heart with the presence of divine firelight. I contend that these three images accurately clarify the intention of Genesis 1:26-27. I further assert that God’s image, according to God’s likeness, is unrelated to the anatomy of the human body. Rather it is intimately connected to the human mind and lives forever within the human imagination to inspire the human spirit. These conclusions are also depicted in, “The Clock—A Timekeeping Tool for the Church of Tomorrow.[ii]

[ii] Wimmer, C.S. The Clock—A Timekeeping Tool for the Church of Tomorrow, Bloomington, IN. Westbow Press, A Division of Thomas Nelson and Zondervan, 2015