Weeding Between the Lines

An inerrant belief suggests infallibility of thought, word, or deed written on the lines of sacred text. An inherent belief suggests an essential, intrinsic, natural, fundamental, innate, inborn characteristic of the Bible—and that characteristic is not inerrancy, but goodness. Essentially the Bible imparts an overarching message of God’s goodness, grace, and mercy. Yet the reader must discern the weeds between the lines of sacred text in order to highlight a truthful image of God.

A major reason that inerrancy is a preposterous notion is stated in the text of Genesis 3. The writers of the Hebrew Bible introduce us to the problem of spiritual deception. Hence the very people who tell us the untidy truths about their sacred journey admit to a lack of spiritual discernment right out of the starting gate. What they also confess, over and over again, is the idea that deception compromises their relationship with the Divine One.

It’s almost as if the writers are saying,

“Okay guys, we have a history that needs to be preserved. It’s far from perfect, but it’s valuable. So valuable that we’re confident God wants us to preserve our thoughts and experiences.

Are we in agreement? Good! Then let’s do our best to collect our written scrolls and put them together in some kind of chronological order. Then we can pass our spiritual history on to future generations.” 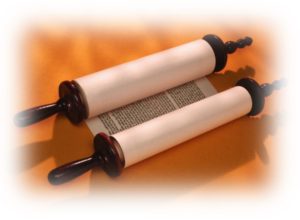 It didn’t matter that the writers may have been deceived when thinking God was on their side in every battle. That deception was most likely their greatest blind spot. A valuable deception to permanently record!

Beginning with the full disclosure of deception—realized or unrealized—sacred texts were gathered, edited, embellished, redacted, and finalized. And what an amazing story it is! Perfectly told precisely because it isn’t infallible. In fact, it is filled with spiritual mistakes, misguided blunders, unholy miscalculations, sanctimonious screw-ups, and misprinted images of the Divine One.

That’s what makes the Bible salaciously enticing. The entire Bible, from Genesis to Revelation, is the most scandalous picture of humanity’s spiritual depravity ever recorded. And thank God it has been recorded! Without seeing ourselves in this spiritual picture, we would never be able to transcend our depravity!

It’s full of weeds! He even identified the reason for the weeds. Humankind has a spiritual enemy. The very same enemy fingered by Eve in the text of Genesis 3. Listen!

“The kingdom of heaven may be compared to someone who sowed good seed in his field; but while everybody was asleep, an enemy came and sowed weeds among the wheat, and then went away. So when the plants came up and bore grain, then the weeds appeared as well,” Matthew 13: 24-26.

Worse yet, Jesus discloses our adversary’s sneakiness. The weeds are sown while the human spirit sleeps. Yep! While we humans are nestled all snug in our beds while visions of sugar plums dance in our heads—weeds are being sown in our spiritual wheat field. If anyone makes the assertion that no weeds are growing between the lines (their interpretation) of sacred text—run! Such an assertion indicates that they cannot see the weeds. Even the master’s servants saw the weeds. Listen!

“The servants of the owners came to him saying, ‘Master, did you not sow good seed in your field? Where, then, did these weeds come from?’ He answered, ‘An enemy has done this,’”Matthew 13:27-28.

Then the servants wondered if they should pull the weeds out of the field. But the master told them to let the weeds grow together until the time of harvest, otherwise too much wheat would be mistakenly pulled up with the weeds. Again, Jesus reveals humanity’s complete lack of discernment in distinguishing wheat from weed in the kingdom’s wheat field.

Today, 2019 years after Jesus told this parable, we must wonder, “Is it time to begin discerning the weeds that have grown up between the lines of sacred text? Is the harvest in our knowable future? Are we at the point where we can recognize the weeds that are choking out the inherent goodness of God’s message?”

I believe the age of weeding has arrived!

The task of weeding our theological garden is formidable but not impossible.