A Woman in Travail

Humanity’s spiritual waters are being stirred in mighty ways right now. The commotion is carrying people to very different places of understanding. There is no right or wrong place to be at the moment. We simply are where we are. Everything is in a state of flux because spiritual waters are being stirred. Thus, the traditional model of the church resembles a woman in travail. She is struggling to understand the times. Why are her efforts not yielding sweeter fruit?

I feel compassion for the historical journey of this woman, the bride of Christ, as she struggles to emerge from her cocoon. She knows she must become the beautiful creature she is intended to be. The struggle of the butterfly, freeing itself from its cocoon, is the perfect metaphor for the changes currently taking place in the church universal.

The church is undergoing a spiritual metamorphosis. The transfiguration will radically change her appearance in the world. The process involves death to her former self and an acceptance of a new image. As the process moves forward in time, the church will leave behind her spiritually immature ways. In doing so, she will gradually adopt a spiritually mature adult nature.

This is no small matter!

The church’s reputation is at stake. People are no longer willing to accept her caterpillar status. The bride of Christ needs to fly – and rightly so!

The analogy of metamorphosis is not the only one that can be applied to the current changes taking place. The church universal has reached her midnight hour on the 8th Day of Creation. The New Testament features many accounts in micro, 24-hour time, that foreshadow the life of the church in macro, age to age time. To understand macro time, take a moment to examine the illustration of the 8th Day Clock of Creation below. 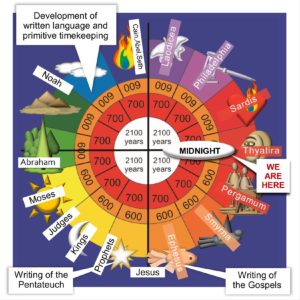 In light of macro time on the 8th Day of Creation, consider the following accounts. Each story became part of the New Testament 2,000 years ago. The writings provide analogies regarding the present status of the church universal.

The captain didn’t set sail 2,000 years ago, hoping to end up lost at sea, holding on for dear life during a violent storm. But that’s precisely what happened. During the storm, all sense of orientation was lost. At midnight, the crew took soundings and realized they were approaching land. So they dropped anchors, prayed and waited for daylight.

When dawn arrived, they could see land in the distance, but they did not recognize it. Pulling up the anchors, they believed their vessel would carry them to dry ground. But the ship hit a barrier reef. The crash was so intense that the ship splintered apart and had to be abandoned. No lives were lost, but everyone needed to either swim to shore, or grab on to broken boards and float to dry land.

The captain, crew, passengers, soldiers and prisoners spent the entire winter season on the island of Malta. Much was learned during that winter. Many people were healed. When they were able to set sail again, they embarked on a totally different sailing vessel.

As foreshadowed by the shipwreck off the coast of Malta, the current events impacting the church universal are like a severe nor’easter storm. The church universal is being tossed about. She doesn’t know her orientation at sea. The current institutional model will not survive this spiritual storm. But her people will survive. Eventually, the institutional model will hit a barrier reef and fall apart. At that time, her people will need to swim to unrecognizable land where they will winter in unfamiliar territory.

As the midnight hour passes in macro time, the best thing that the institutional church can do is to take soundings. The church should prepare to drop anchors, stop sailing, and wait for more light. Only when the church stops trying to sail along, will God’s spirit be able to teach her, heal her, and get her ready to sail again with a different model as her vessel.

The church is also like the hemorrhaging woman, fighting her way through a nameless, faceless crowd for a chance to touch the hem of Jesus’ garment. She knows she is not well, so she is seeking to be healed. Her arm is outstretched as far as she can extend it. Yet the crowd pushes against her. She cannot get close enough to touch him. We know how the story ends, but at the present time, the church is like this woman. She is caught up in a crowd of people who are literally preventing her from touching Jesus.

In macro time, this foreshadowed saga is playing out in painfully slow-motion cinematography. We can see the look on the church’s face. We can feel the hope in her heart. We know she has faith that she will get close enough to touch Jesus. She just needs to keep pushing her way through the crowd. How we wish we could increase the speed of the film! But that’s not possible. Her healing will occur in God’s time.

The church is presently waking up to a midnight hour cry. “The bridegroom is coming!” Unfortunately, her bridesmaids have run out of oil and cannot see their way to the banqueting table. Worse yet, other bridesmaids are hoarding their oil. They fear that they won’t have enough light if they share their extra oil with the others.

Instead of sharing with those in need, they selfishly send their sisters into the dark of night to purchase oil for themselves. They send them away from the only available light. This image of ten young maidens reveals a true lack of understanding regarding what behavior might please the heart of the bridegroom. Everyone is acting foolishly. No one is acting wisely.

The church has lived the life of a hard-working Martha figure. Martha thinks she is well within her right to complain about her sister, Mary who is being less than helpful in the kitchen. Instead, Mary chooses to just sit at Jesus’ feet and listen to him.

The Woman at the Well, John 4.

The church is like the woman of Samaria who stood in the heat of the day at a well of water, only to discover her own reflection in the eyes of Jesus. Not able to turn away, she was forced to confess her personal truth: “I have no husband.”

The church also mirrors the account of the adulterous woman. She is currently surrounded by people who are all too willing to stone her to death. But, what is the church’s crime? Has she been committing adultery? Has she been looking for love in all the wrong faces, when only Jesus’ love will save her from the stone throwers?

Lastly, the church is also living the life of a pale green horse whose rider is Death. Hades, the god of the dead, is close behind.

Despite the woeful imagery, these biblical accounts provide an incredible amount of insight for the church during this midnight hour on the 8th Day of Creation.

Take heart. It’s a process. God’s spirit is guiding us. All is well.