To Christian citizens in the United States of America:

Can we talk? I’m concerned about where we are headed in our nation, if we don’t. Our nation is deeply divided. It seems that the motto, “E Pluribus Unum” no longer applies to life on Main Street. “Out of many – One!” has turned into “Out of many – Two!” and never the two shall meet.

Some of us are right-hearted Christians.

Some of us are left-hearted Christians.

Yet, our spiritual environment is so unhealthy, that we have become incapable of functioning together as “whole-hearted” Christians. We can no longer work in harmony with one another to create a healthy society. 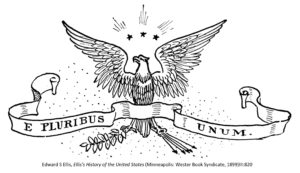 At the deepest core of our societal division, two vastly different images of God exist. It’s not a political division. Rather, sincerely held religious beliefs have divided people into two predominant political parties. Most Christians are unaware of the fact that their image of God determines their worldview. In fact, one’s perception of God consciously and unconsciously shapes one’s view of life. Conservative and liberal opinions will always exist. But if we could agree on one foundational image of God, Christians would be able to operate from a common starting point. At the present time, Christians operate from two vastly different starting points, because people subscribe to two different images of God.

Without realizing it, our different ideas of God and the Bible became slowly engrained over many generations. Today, we have inherited this unhealthy division which began over a century ago. When focused on our present dysfunction, all we can do is argue, throw stones, spew hateful rhetoric, and assign unflattering labels to each other. Yet underneath all of the unloving noise, important questions about the division remain unanswered.

“What is the spiritual dilemma that lies at the deepest core of our societal division?”

I understand the difference in the following way. A two-faced image of God is a God who offers love and mercy with one face, while threatening judgment and punishment with another face. One face offers conditional access to eternal love that is based on meeting certain criteria. If someone is unwilling or unable to meet the criteria, the other face of God judges the person’s unwillingness, then punishes the person in this lifetime, or for all eternity in hell.

By contrast, a one-face image of God offers unconditional access to eternal love. God’s one face requires nothing of humanity to whom love is given. God is not seen as a punishing entity, but as a forgiving entity. God steadfastly abides with those who suffer, those who make poor choices, and those who cannot love in return.

People who believe in a one-face image of God do not believe in a literal hell. The lack of belief in hell also causes division in society. Those who don’t believe in hell are called heretics. Many folks who subscribe to a two-faced image of God, want to send the one-face heretics to hell for not agreeing with them about hell. Yet the societal problems, arising from this fundamental disagreement, has entered our politics in the form of laws. Those who believe in a two-faced God who loves only the righteous, while punishing the wicked, are the very folks who write laws favoring their perception of righteousness, or their perception of wickedness. Human laws always reflect human ideology.

The two-faced image of God stems from a belief that God had, at one time, required animal sacrifice to pay for the sins of humanity.

God is believed to have required Jesus to become a human sacrifice. Thus, the two-faced image of God demands the spilling of blood as a payment for sin. This sacrificial idea demands that something must be exchanged to receive forgiveness. It sets up a contractual agreement made between God and humans. God says, “You do this and I will reward you. If you don’t do this, then I will punish you.”

This same two-faced image of God, is a God that required Jesus to be a human sacrifice. If someone cannot accept that Jesus was God’s chosen sacrifice, that person will be sent to eternal hell to burn forever.

The one-face image of God is a God who never required sacrifice.

Never. All ancient sacrificial practices were carried out as a human expression of remorse, and an admission of sorrow. Ancient sacrifice was not carried out as a condition upon which forgiveness would be received. It was carried out as ceremonial ritual, established to grieve over the loss of innocence, spiritual disobedience, and a right-relationship with the Creator. The ritual was not done in exchange for forgiveness. It was done to cleanse and remove sin from the collective body of God’s people. It was a ritual intended to have the sin of the people carried away into the wilderness.

Since God never required people to kill or spill blood, in exchange for confession of sin, or receipt of forgiveness, there exists no threat of hell, if right action, or belief, isn’t accomplished.

Eventually, humans called for the death of Jesus. He was an inconvenient figure in the Roman Empire, and a threat to religious authority in his day. Too many leaders perceived him as someone who was upsetting the applecart of normalcy. He was blamed for the cause of social discomfort. People seem to need scapegoats to blame for their discomfort. Jesus was the perfect target.

In walking to the cross with Jesus, God fully participated in the suffering of the cross. Rather than lashing out in anger towards humanity, Jesus revealed the one, true face of God, as a merciful face. He revealed a face full of grace and love. “Forgive them,” he said, “for they do not know what they do.”

The one-face image of God portrays a Creator who would rather die, at the hands of ignorant humans, than punish humans for being ignorant.

As in every case, once the targeted scapegoat is eliminated, people begin to feel relieved that their “guilty scapegoat” cannot torment them any longer. Yet several problems exist in this type of faulty thinking: 1. Relief is temporary, lasting only until the next problem comes along; 2. Jesus wasn’t guilty of any wrongdoing; and 3. Jesus didn’t remain dead. The scapegoat wasn’t eliminated. The scapegoat lives forever as a living testimony to God’s mercy. But also as a living testimony to human ignorance.

So, what can we do about hell and the image of a two-faced God who punishes the ignorant?

The image of fire is always used in Scripture as a symbol of refinement. Fire makes something, or someone, more perfect. God’s divine fire never punishes or destroys. For people who honor a one-face image of God, the concept of hell is not a place of eternal torture. Instead, it is the process by which impurities are cast off. A place to create ultimate beauty and strength of purpose. Thus, we all go through such fires.

Again, the societal problems, arising from different perceptions of God, enter into our politics in the form of laws. Those who believe in a one-face image of God, will be the very folks who write laws that favor their perception of unconditional love, mercy, compassion, empathy, and restorative justice. Human laws will always reflect human ideology.

If we fail to discuss these spiritual differences, they are guaranteed to reach a boiling point in the United States of America. If we give in to our ignorance, we will scapegoat each other, point fingers of blame, and ultimately take up arms to kill each other. It will be a war fought over whose image of God will prevail. It will be a war fought for the right to impose one religious ideology on the entire nation, versus the right to prevent that kind of imposition. Both sides will believe their image of God is correct, true, and best for America. No one will win. Everyone will lose.

Before we go down the warpath, beating our drums, perhaps we could sit down at a common table, set by Christ, break bread with each other, and talk about the two images of God that shape our opposing worldviews.

Ultimately, only one image of God will create a healthy society. We must choose which image will restore a sense of wellbeing, and return the “e pluribus unum” motto to Main Street, USA.

Here’s something else to consider:

The model, by which we could work in harmony to create a healthy society, is observed in the human heart.

In the same way, the willingness to function in tandem, between right and left hearted Christians, (conservatives and liberals), would also result in the wellbeing of society. As stated earlier, conservative and liberal opinions will always exist. But if Christians agreed on one foundational image of God, the majority of Americans would at least operate from a common starting point. Rather than blindly choosing violence, as the age-old way of resolving conflict, why don’t we take the time to ask and answer a few critical questions?