In my circle of influence I hear comments that indicate an internal questioning. We all know that major change is upon us, yet we wonder where the change is leading? I happen to think millions of spiritual leaders are floundering for direction right now. I think Jesus’ vision for where the human spirit *must go, and how the human spirit *must grow, was made known during his earthly ministry. 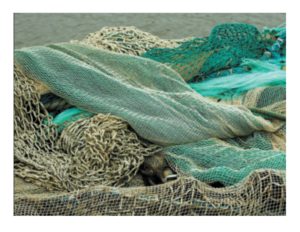 Jesus called several fishermen as his first disciples – telling them he would change their profession from fishers of fish, to fishers of people. He demonstrated a bread-passing method during the feeding of the 5,000 and 4,000 people. He also made known the fact that the kingdom of heaven was like a net.

As I look at the big picture of Jesus’ life, I see a strong connection between the call to become fishers of people, the miracle feedings of thousands, and the imagery of a kingdom like a net.

During the two feedings, Jesus methodically taught his disciples the following:

The future of this miraculous method was wholly dependent on people’s  willingness to “Go, and do likewise.” This is where the human spirit failed to capture the net-making vision many centuries ago. When Christianity was finally allowed to be practiced openly, following years of persecution, the early church patriarchs lost the net-making method that supported the miraculous feedings. So, the patriarchs defaulted to the hierarchical approach when building kingdoms. That approach looked nothing like human net-making.

Instead, the early church fathers began to judge people based on their worthiness to participate in the kingdoms THEY were building.

I discern no attempt on Jesus’ part to classify hungry people, qualify their worthiness, judge their level of need, or bind them to any conditions of belief. I only see recognition of hunger, the need to group, the need to distribute, and the desire to send. I also hear Jesus saying, “Do THIS in remembrance of me.”

The problem with the model of church that we’ve inherited is that the recognition of hunger, the grouping of people, and the distribution of bread took on the element of classification, qualification, judgment, and binding to conditions of belief. Therefore, the sending of people mirrored the same behaviors. This created a perpetual cycle of dysfunction. The church took on an image that looked nothing like fishing for people who would build kingdoms that looked like nets.

Christianity, as it has been practiced since the time of the early fathers, failed to comprehend the first step in Jesus’ method – a true recognition of hunger. Because the true nature of spiritual hunger went unrecognized, Christianity eventually left people starving, both literally and figuratively. Yet the institutional model of the church system continues to demand loyalty to its cycle of dysfunction, while simultaneously serving communion as the method of meeting human hunger.

As lovers of the Gospel, we must ask, “What was the nature of the hunger Jesus perceived during the miracle feedings.”

I believe Jesus understood something that neither the Empire or the Temple was willing to see. I think Jesus understood the hunger of people as the need for personal empowerment. The crowds that gathered to hear Jesus’ teachings wanted some sense of control over their own destiny under the brutal weight of oppressing systems. The Empire and the Temple were in full control. The hungry people were looking for a Way out from under the oppression. Jesus basically showed them the way to take care of themselves and their neighbors, without relying on the Roman Empire or the Temple system for social and economic justice.

Right before their eyes, Jesus taught his disciples how to make nets of people, pass bread, and send them on their way. The miracle feedings were live demonstration, on two separate occasions, that revealed how social justice, equity, and fair living could be accomplished – all without classification, qualification, judgment, or conditions of belief. He taught people how to circumvent the Empire and the Temple. Not by undermining either. Just circumventing both!

The same circumvention must occur today.

As Christianity conflates its identity with the Empire, neither Church or State empowers people to build their own kingdoms of heaven. People are not encouraged to create small, geographic networks, break the available bread, and distribute it among their network. Both Church and State are guilty of starving the general population, while simultaneously creating systems of dependence and dysfunction.