Genesis 1 and the Limits of Historical Criticism

In an endeavor to approach the study of the bible with some degree of consistency, biblical scholars developed criteria known as “historical criticism” to guide the study. During my time as a member of the Society of Biblical Scholarship, I heard scholars discussing whether or not we’ve come to an end of what can be gleaned through the historical critical lens.

For the readers who might be unfamiliar with the term, the historical critical lens focuses on the following aspects of study:

1. determining authorship of a given writing.
2. dating the specific text.
3. examining the text in its original language.
4. comparing the text to other ancient near eastern writings.
5. searching for any archaeological evidence linking to the text.
6. considering cultural practices in place when text was written.
7. keeping the text in its historical context when interpreting.

This list may not be exhaustive, but when factored into the study of biblical text, scholars are said to peer through the historical critical lens. Scholars have been employing this lens for the past 150 years. This type of examination has brought a wealth of information to the general public. Anyone reading the footnotes of a study bible will reap the benefits of historical criticism. So, the lens, itself, is to be respected.

That said, during the past two decades, new lenses have flooded the realm of scholarship. One most notable is the female eye that examines text through a feminist lens. Another lens that must be added to our study of the bible is the anthropological lens of the human journey through time. More recently, the Girardian lens, named after French philosopher, Rene Girard, is gaining recognition. The Girardian lens helps people become aware of the connection between religious sacrifice, scapegoating, violence and retribution.

Yet the lens of light, color, and imagery is strangely absent from scholarly study. I say, “strangely absent” because the Ancient Near Eastern peoples were visual people. They were not people of a book. They did not process their world through written words. Few people even knew how to read. Most were illiterate.

To peer through the lens of light, color, and image, forces the reader of Scripture to use the right side of our brain.

It forces one to consider the images painted by the text. The lens of light, color, and image translates written text into ideas or pictures, in the same way that an artist brings images to life on a canvas. As an example, one only needs to begin at the beginning of the biblical library. There we will discover that the text of Genesis 1 follows the color order of the visible spectrum of light.

When considering the opening verses of Genesis, the reader is intentionally placed in a sea of darkness. Time, heaven, earth and water exist, but these entities exist in utter darkness. Nothing is visible, but the divine presence of God is made known, both as Creator and Spirit, male and female, in the darkness of the unseen.

It is at that moment in the text that the priestly writers open their story of Creation to the visible realm of human eyesight. It is as if the writers want the reader to know that God makes the visible possible. Now, God’s divine presence is illuminated! Then we, as readers of Scripture, are invited into the process of creating the Creation.

From that point forward, the story moves through six different colors in the spectrum, from the darkest violet-blue into the richest red blood of the animal kingdom. Each color represents the creative activity on that particular Day. Then, the color purple becomes the seventh color on the Sabbath Day of rest.

Why have scholars missed this migration of color when we’ve all known that the opening words of Genesis 1:3 read, “Let light exist?”

The migration from dark violet to deep red, followed by purple, has been overlooked because the historical critical lens does not focus on color or imagery. Hence, we haven’t had a credible way to connect the colors of Creation to the images of Creation in this foundational text.

What damage has this blind spot caused?

For starters,  a lack of light has created a chasm between a literal understanding of a Day and a symbolic understanding of Day. Both interpretations fail to show the passage of time as the presence of revealed light, as well as complete journeys of time around the visible spectrum of light.

Thus, the Hebrew word “yom” refers to time spent in the presence of God’s revealed light where no lamp of sun or moon is needed. 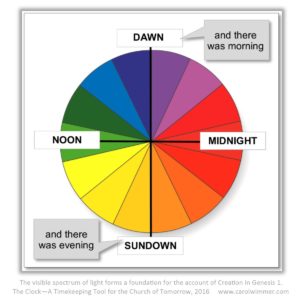 The priestly writers gave us every word necessary to be able to see the presence of light. But they stopped short of opening our eyes to the presence of color in their written text.

For this reason, scholars have not connected the text of Genesis 1 to the covenant of the rainbow in Genesis 9, which is also believed to be written by the priestly pen, according to the documentary hypothesis.

In closing, Scripture is filled to the brim with a language that is not uttered by the human tongue. It is chocked full of spiritual insights that are not based on the Hebrew, Greek, or Aramaic languages. If scholarship would include the lens of light, color, and imagery into a credible study of Scripture, an entire realm of information will become visible to the reader’s eyes – a realm far too important to keep chained up in darkness.