Are We Missing the Point with Genesis 1?

Since the late 1800’s, most biblical scholars have favored a mythological view of Genesis 1. In spite of their attempts to promote this view of the Creation account, many Christians hold fast to a literal reading of the text. God created the heavens and earth in six, literal 24-hour days. These two opposing interpretations have caused a host of problems, especially in American culture. But, what if we are missing the point with this text? Suppose both interpretations are inadequate. Is this possible?

Our eyes are failing us!

When reading the text of Genesis 1, we focus our attention on black letters, written on a white page. We focus on the Hebrew language rather than language of nature, spoken by the created images, themselves. Scholars delve into the idea of original cultural context, rather than a universal context of common imagery. We concern ourselves with the ways in which this text compares with other Creation stories, written around the same time in Ancient Near Eastern history. We dig our heels into the soil of human opinion, regarding the length of a “day,” and conclude that it can only be 24-hours in duration, because that is the length of our 24-hour day! The Bible doesn’t lie!

Moreover, the debates over how to interpret Genesis 1, are defended from highly intellectual positions, which erroneously pit science against religion, and intellect against faith.

Are we missing the point of this text?

Our eyes fail us because we do not come to this text with the eyes of a child!

If we did, we would discover that the literary structure of this ancient text follows the color order of the visible spectrum of light.

The entire story of Creation is built upon six colors in the rainbow, followed by a purple day of rest. Why have we missed the fact that the words, “Let there be light,” points to both divine and physical light?

Why does the literary structure of Genesis 1 follow this particular color order? What does the order teach us? Why does the account begin at the darkest end of the spectrum? Why do the colors, orange and red, represent the living creatures?

If so, then the day cannot be a literal 24-hour day. Nor is it a symbolic day with no designated movement through time. Rather, each day of Creation becomes a journey through time and light, with a defined beginning, and a defined end.

Then, suppose the text of Genesis 1 was inspired to reveal that same journey through time and light, on each consecutive day? If so, we’d have a text that looks like this: 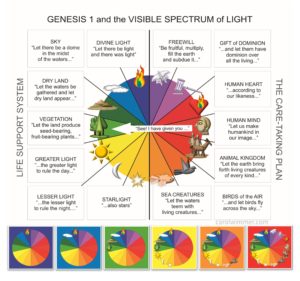 Why does this perspective of Genesis 1 matter?

Because the foundational text of the Bible points to a literal Creation, in order to teach spiritual truths. It also provided a timekeeping methodology, as well as a common spiritual language, as God’s voice speaks through the 14 images of nature!

It has long been suggested that the Jerusalem priesthood is responsible for this text. Yet, if we miss the circular motion of time, and the presence of the visible spectrum of light, their carefully created spiritual foundation of faith, is also missed.

We cannot be satisfied with a literal, or mythological reading of Genesis 1. Both readings miss the point!