The Crevice After the Quake

People wonder if Christianity can survive the major spiritual shift, away from religion, currently underway around the world. Oh yes! Not only can Christianity survive—the heart of the gospel will begin to beat like never before. The human spirit is just waking up to an increase of light filtering into crevices formed by the earthquake rattling the walls of our institutional structures.

The earthquake will ultimately free prisoners of harmful teachings within our churches, seminaries and bible colleges. For far too long Christianity has been held by the chains of conformity to right-believing and like-mindedness. Despite the past centuries of singing God’s praises, the church doors were tightly controlled by the powers that be.

In fact, the book of Acts perfectly foreshadows the scenario. Listen!

“About midnight Paul and Silas were praying and singing hymns to God, and the prisoners were listening to them. Suddenly there was an earthquake, so violent that the foundations of the prison were shaken; and immediately all the doors were opened, and everyone’s chains were unfastened,” Acts 16: 25-26.

I talk a lot about the midnight hour because we are experiencing the shift as the earth moves from one age to another on its precession of the equinox!

We are indeed passing through a major midnight hour shift on the 8th Day of Creation. The foundation of the institutional church is shaking in mighty ways as we say goodbye to the Age of Pisces, and say hello to the Age of Aquarius. 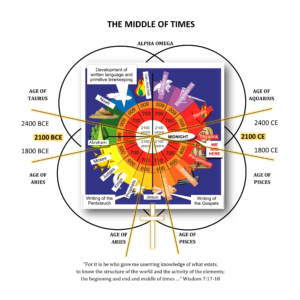 It can feel wrong when we imagine things that we once held dear, turning to piles of rubble. When institutions collapse and systems of power become wobbly, humans only have three ways of coping with the change:

We’ve seen people who, in full panic mode, devise ways to take back their illusion of control. We’ve observed people run for the exit and never look back. Such human activity is all quite real in our everyday world. Yet we don’t really notice the millions of folks who are quietly adjusting their perceptions during these shifting conditions.

In Acts 16, the jailer panicked when the earthquake hit. It was midnight. He’d been sleeping on the job. He immediately surmised that he had lost all power to protect the institutional prison system. Fearing the Roman government would surely punish him, he thought suicide was his only option.

“When the jailer woke up and saw the prison doors wide open, he drew his sword and was about to kill himself, since he supposed that the prisoners had escaped,” Acts 16:27.

Well, that’s one way to head for the nearest exit and not look back! But Paul shouted to the jailer in a loud voice, “Do not harm yourself, for we are all here.”

Paul and the other prisoners had the chance to head for the nearest exit, but they chose to stay.

Moreover, they lobbied on behalf of their jailer. You could say that the prisoners recognized the jailer’s predicament. He was as much a victim of the Empire’s institutional prison system as they were. Yet here’s where things truly become interesting in this account.

You see, an invisible crevice formed after the quake.

An ever so tiny opening occurred in the hearts and minds of everyone involved. And that itty-bitty, ever-so-miniscule crevice allowed the light of Christ to enter. Listen!

“The jailer called for lights, and rushing in, he fell down trembling before Paul and Silas. Then he brought them outside and said, “Sirs, what must I do to be saved?” Acts 16:29-31.

Notice it’s the jailer who called for lights. The prisoners weren’t asking for lights, but the jailer requested light so he could bring the prisoners outside. Yeah! That’s right. The very prisoners that the jailer put in chains were now being brought outside of the prison in the dark of midnight. The crevice after the quake made this possible.

Once outside the collapsed walls of the prison, Paul and Silas began to shine the light of Christ into the newly formed crevice within the jailer’s mind. This is the account of what was said:

They answered, “Believe on the Lord Jesus, and you will be saved, you and your household.” They spoke the word of the Lord to him and to all who were in his house. At the same hour of the night he took them and washed their wounds; then he and his entire family were baptized without delay. He brought them up into the house and set food before them; and he and his entire household rejoiced that he had become a believer in God, Acts 16:31-34.

It’s a rather insignificant story of a complete overthrow of governmental power at midnight. It’s a story that doesn’t make headlines or reach the evening news. Yet this micro story in 24-hour time foreshadows a larger macro story in age to age time. The jailer, who was once so committed to his Roman system of oppression, ended up washing the prisoner’s wounds and setting a table of food for them, after the earthquake.

Like Paul, I am lobbying on behalf of the church and her leaders during this midnight hour. All of us, leaders and laity alike, are victims of institutional thinking. But the church doesn’t need to be chained to her past, or imprisoned by her previous ideas. Current church government simply needs to be overthrown because it acts like a controlling oppressor.

So, when I hear people wonder if Christianity can survive the major spiritual shift currently underway, I have no doubt. We can be certain there’s going to be a whole lotta shakin’ goin’ on before all is said and done. But the spiritual earthquake, rattling the walls of our institutional structures, is letting in the light of Christ.

That said, Christians would do well to understand the choices to be made at this midnight hour. Remember, it was the jailer who called for light and initiated questions of faith. Our job as people who hold the Christ light, is to trust that God’s spirit will create many crevices after the quake. Our job is to adjust our perceptions regarding the shifting conditions.