How Would Jesus Organize the Church?

Of all the subjects taught by church leaders, organizing people for effective ministry is rarely one of them. Yet, we all know that a well-organized mission is key to its success. Furthermore, we know that people are not likely to participate in a mission that is not well-organized. So, what does the Bible say about organizing the church? Does the Bible contain any organizational teachings?

Well, the word, organize, does not appear anywhere in Scripture! But that doesn’t suggest that the Bible offers no help in this area of thought. The better question is, “Did Jesus have a vision in mind for his bride? Did he show us how to organize the church during his earthly ministry?”

Yes! Jesus did reveal his vision for the church when he fed the 5,000, followed by a feeding of 4,000. But, we haven’t been taught to pull the organizational clues together. We haven’t known how to understand his vision. Jesus saw a bigger picture than we currently see. The organizational structure that Jesus upheld, during his earthly ministry, originated with Jethro’s advice to his son-in-law, Moses, recorded in Exodus 18. Jethro’s advice was to organize the tribal community in 1000’s, 100’s, 50’s, and 10’s.

This well-known division of leadership, during the time of the Exodus, was taught by Jesus when he gave his disciples blessed and broken bread, to distribute among the crowd of 5,000, Mark 6. Later, when feeding the 4,000 in Mark 8, Jesus increased the size of the organizational model to 1000’s, 144’s, 72’s, and 12’s. The increase in size was indicated by an increase in bread, from five to seven loaves.

This increase in organizational size, from 100’s to 144’s, reflects the number 144,000 in the book of Revelation. It is a number symbolizing the organization of the church, in her state of completeness. It is also important to note that the original tabernacle, in the wilderness of the Exodus, was supported by 100 silver bases, while its walls were held together by 144 gold rings. Both numbers are attached to issues of structure, from the earliest time of Exodus, to the visions in Revelation. 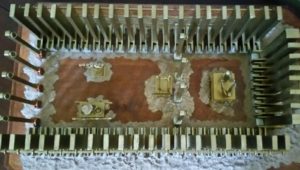 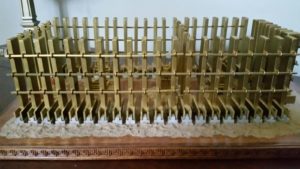 The Image Associated with the Vision:

The organizational clues in the Bible, indicate that an organizational vision for the bride of Christ, does exist! But, Jesus also had an organizational image in mind. The image includes movement! Jesus said, “The kingdom of heaven is like a net that was let down into the lake, and caught fish of many kinds, Matthew 13:47.

Note: When the bases, posts, crossbars, and projections of the ancient Holy Place are laid on the ground, the image resembles a net of horizontal and vertical lines. One center post, at the entrance to the Holy Place, is missing in the photo below. Symbolically speaking, this post is believed to have moved through the Temple, tearing the shielding curtain in two, from top to bottom, at the time of Jesus’s death, Mark 15:38.

This movement carried the Holy Place into the Most Holy Place, symbolically erasing the division, believed to exist between God and God’s people. With the division erased, the ancient structure of the Temple collapses to the ground. All that remains is one Holy people on earth, functioning as God’s Most Holy people. This symbolic movement is the same change that takes place, as perfect love enters into the human heart. 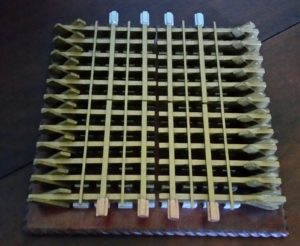 Because Jesus had a specific image in mind, for the body of Christ, he selected capable net makers when calling the first disciples. Peter, Andrew, James, and John were four fishermen who made nets for a living. Jesus called net makers because he wanted to repurpose their net-making skills. He wanted the fishermen to learn how to make nets of people, by people, and for people. Hence they would become “fishers of people” for the purpose of creating the kingdom of God.

This is a critical organizational understanding.

When this happens, millions of people think they are saved by Jesus’s love for them, while millions of communities are left without nets! This is a big part of the dysfunction of the church of today!

When Jesus asked his disciples, “Who do you say that I am?” Simon Peter answered, “You are the Messiah, the Son of the living God.” Jesus then replied, “Blessed are you, Simon son of Jonah, for this was not revealed to you by flesh and blood, but by my Father in heaven. And I tell you that you are Peter, and on this rock I will build my church, and the gates of Hades will not overcome it. I will give you the keys of the kingdom of heaven; whatever you bind on earth will be bound in heaven, and whatever you loose on earth will be loosed in heaven.”

Then he ordered his disciples not to tell anyone he was the Messiah,” Matthew 16.

See! Jesus wasn’t interested in declaring himself to be the Messiah. He was interested in creating a different kind of kingdom on earth. Jesus declared Peter to be the rock, upon which his vision of the kingdom of heaven would be built. Why? Because God had revealed Jesus to be the Messiah in Peter’s heart and mind. God’s spirit had done the revealing, not flesh and blood.

For this reason, fishing for people was never intended to be a flesh and blood exercise, to strong-arm people into claiming Jesus as Messiah. It just isn’t. Nor is it an exercise to get people into a future kingdom of heaven after they die. No! Fishing for people is an exercise in organizing the kingdom of heaven here on earth! The fact that God had revealed Jesus as the Messiah in Peter’s heart, was a crucial first step. So Jesus gave the netmaker, the keys to the kingdom Jesus hoped his disciples would build.

In context, we must appreciate that the keys opened Peter’s mind, to the insight he needed to make nets of people, by people, and for people. Peter was a fisherman who knew how to make nets! Thus, Peter took the keys of insight, and organized the first net, in Acts 1, according to the vision Jesus imparted, during the feeding of the 5,000 and the 4,000. Were Peter’s early attempts at net-making perfect? No. Not by a long shot. Peter had much to learn, just as we have much to learn.

But, the organizational vision Jesus imparted, was modeled after the tribal encampment, born in the Sinai desert, during the time of Moses. Peter understood that much. What Peter didn’t realize was that his Jewish ways of exclusiveness, needed to model Jesus’s Way of inclusiveness. The kingdom of heaven was to be built of ALL people, by ALL people, and for ALL people. Eventually, Peter saw a vision of a sheet held by its four corners, coming from the heavens, and lowered to the earth. Within the sheet, Peter saw all kinds of creatures he believed to be unclean. Yet, God deemed them clean. After this, Peter finally captured the inclusive nature of the kingdom of heaven.

Still, it was difficult for Peter to understand how this organizational model was to work. Truth is, Paul didn’t understand everything about the model either. It was Peter who held the keys, and Peter and Paul had a rather rocky relationship. Neither could understand every aspect of Jesus’s all inclusive Laws of Love, or the ways in which the Laws of Love trumped the 600+ laws of Moses. Both spiritual leaders were too close to the crucifixion, and to Judaism, to realize the full implication of a new covenant based on the Laws of Love.

So, even the earliest attempts to organize were not as successful as Jesus might have hoped. The yeast of religious and secular leaders quickly rose, back in those early days. Persecution set in, and the only leaders of The Way, who knew of Jesus’ net-making vision, were soon killed.  The rest is history, as they say. Then again, perhaps Jesus knew full well, that humanity’s first attempt to build the kingdom of heaven, would fail. Hence, we have arrived at a point, where the human spirit must ask for the keys of the kingdom, again.

Question: How would Jesus organize the church?